As a follow-up to my post Play TV Canada is a Scam, I watched it again last night. Once again, I couldn’t turn away; it’s like a train wreck. A train wreck with the conductor begging you for money while he wades through the victims.

One such victim was brave enough to speak up last night. What sounded like an older gentlemen said, through beeped out swearing, something like “you people sure are takin’ advantage of a lot of people, and I oughta-” before he got cut off. Good for you, angry old man. You’re fighting the good fight.

Here is one of last night’s “puzzles”: 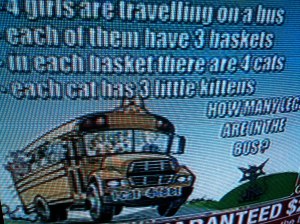 I’ll write it out:

HOW MANY LEGS ARE IN THE BUS?

Plastered on the bumper of the picture of the bus, for some reason, it says “1 cat 4 feet.”

The host constantly emphasized that this is a simple logic puzzle. And indeed, it does seem to be a straightforward math problem. Hey, let’s figure it out!

How about humans? Well, the question only said there are 4 girls travelling on the bus, so 4.

Which brings us to a grand total of 584.

Someone called in with this answer. “No, I’m sorry, that’s not it,” said the host.

What? Well, we must have missed something. Hmm, ok they’re going by bus, maybe it’s reasonable to assume that there is a driver, even though the question doesn’t say that. He or she has two more legs, so that brings the total to 586.

Someone called this in. “Nooo, sorry.”

Maybe they’re counting the “legs” of each seat, and we’re supposed to use our psychic powers to determine how many seats this fictional bus has, then get some answer larger than 586. In any case, I couldn’t stand that crap any longer, so I shut it off.

Then, in the comments to my last post about this, Kathy (who actually managed to win some money from these people, but still doesn’t recommend calling), managed to wait until the end: “Well, of course no-one got the ‘right’ answer of 222 legs.”

…what? Even if you add other ridiculous assumptions, the answer can’t be less than 586.

They don’t reveal how the answer was arrived at, so there is no way of verifying their solution. Even if there was (e.g., “lol, we meant kitten fetuses without fully developed legs”), it’s not the straightforward solution that they explicitly claim it is. PlayTV is a despicable scam. It’s not impossible to win, but the conditions of winning that they describe are completely different than the actual conditions of winning.

If you want to get involved in shutting Play TV (a.k.a. CallTV) down:

P.S. Please, debate and dispute my math. I’d love to see how anyone can get 222 out of that.

UPDATE: Gavin on Facebook made the suggestion that maybe the kittens aren’t actually in the bus (i.e., the cats “have” kittens in the sense that a person can “have kids” even if they’re not present at the time).

So ignoring the kittens:

Which is the “right” answer. I guess that almost makes sense, except none of the weird assumptions are actually in the question, and what kind of bus only has 5 seats?

That’s right, the short bus. Which is probably what whoever wrote this quiz was riding.

150 thoughts on “Play TV Canada Has No Legs”