I don’t complain much, but when I do, it’s usually about technology. I have an unfortunate combination of bad luck and high standards when it comes to gadgets. Literally, whenever I buy anything with greater complexity than lettuce, it has some flaw, either minor and only noticeable to my hyper-critical eye1 or a major defects2. At least nothing has outright exploded, though not everyone is so lucky (see: iPhone spontaneously combusts aboard flight). It’s tempting to become a cynical old ass, shaking my wooden stick (not a microchip in it!) and grumbling about how quality control has gone down the stinker and nothing works like it should. I’ve certainly given into that temptation a few times.

But think of it this way:

We are a bunch of animals. We were crafted by nature to root around in the dirt, find food, then go home and screw. Yet we’ve taken some of that dirt and, with nothing more than our grubby hands and abnormally large brains, we’ve made tubes of steel that can fly us through the air. We’ve burned sand until we have a slab of glass that allows us to have food delivered to us by poking at it. “Technology” isn’t some mysterious black toaster that pops out perfect gleaming gadgets. We’re literally grabbing whatever imperfect raw materials we find lying around the planet, and sticking them into arrangements that accomplish things no other animal can fathom. 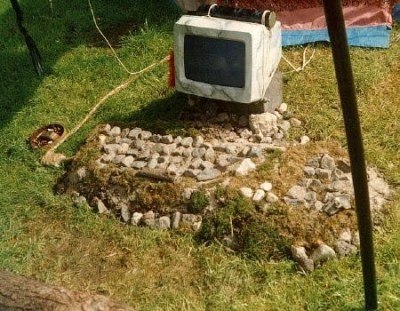 Arthur C. Clarke said that any sufficiently advanced technology is indistinguishable from magic. But the people crafting our gadgets (and crafting the machines that craft our gadgets) are not magicians. They are humans, animals, maybe smarter than you or I, but only by a little bit. They’re working with limited time and limited resources. They get tired. Sometimes the best they can do is try pretty hard, and hope it’s good enough.

Thinking of it this way, it’s odd to complain.

Maybe a dead pixel on my phone’s screen “shouldn’t” be there, but a bunch of strangers managed to get me 614,399 working pixels that beam all of humanity’s accomplishments directly into my eyes. I can probably live with it. I can probably manage to enjoy everything that works despite the small parts that don’t.

There are exceptions; technologies that are defective by design (e.g., DRM, planned obsolescence) are inexcusable. The average gadget works pretty well though, and although it’s not terrible to strive for perfection, I also need a moment to shut up and revel in the the awesomeness of the imperfect magic people have managed to weave.

1 E.g., backlight bleed on my iPad 2, suboptimal battery life on my Kindle, phosphor trails on my TV.

2 E.g., cutting out audio on my iPhone 4S, a computer with a display that occasionally turns to grey fuzz, six dead Xbox 360s.