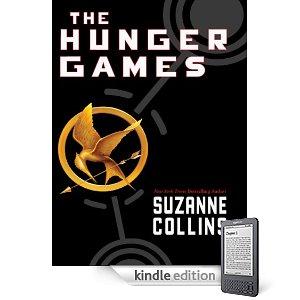 The Hunger Games tells the story of a teen girl living in a future, post-post-apocalyptic world, where an obviously-evil government keeps the people in line by throwing a handful of them into a televised fight to the death in an outdoor arena once a year. Although it doesn’t happen right away (more on that later), it’s pretty easy to guess that she gets involved in the titular Hunger Games.

The concept may sound like a sci-fi trope, but Collins does a good job of painting a world that feels unique despite borrowing pieces from other stories in its genres. The first third or so of the book is mostly setup for the inevitable beginning of the Games. It could’ve been boring, knowing the story is taking its time to begin, but it’s interesting enough due to the colourful character development, world-building, and writing style.

Then the action kicks into gear, and something odd happens. The writing quality drops immediately the moment the Hunger Games actually begin. It’s as if the latter two-thirds were written by another author (or an author who wrote the first chapters years after the latter ones). What begins as straightforward YA-level prose begins sounding like a teenager’s blog. Rambling tangents come back with “anyway”, ellipses replace proper punctuation, and there are outright typos. I half-expected sentences to start ending in “lol.”

It’s not too distracting, and makes some sense given the first-person narrator’s age, but the fluctuation in style was a bit jarring.

Anyway, the story itself is about what you’d expect given the premise. There is some mild satire of reality television and some mild violence (but this ain’t no Battle Royale). Some unexpected twists have impact, but some expected showdowns are a letdown. Maybe it’s a further subtle bit of satire to have some of the major plot points happen “off camera,” but it’s anticlimactic storytelling. Despite my pickiness, it’s a good story that’s often hard to put down, and anyone who’s up with the premise would enjoy it. I’m looking forward to the movie.

This was also the first book I read on a Kindle. I have mixed feelings about that. On one hand, it was a joy being able to sit under a tree in the sunshine (yeah, took me a while to get around to this review) with the tiny Kindle in one hand, flipping pages with the push of a button. On the other, when I wanted to skim the book while writing this review, I couldn’t. And what if I wanted to come back to it in 10 years? If technology changes too much, or Amazon bites the bullet, or I get another company’s incompatible device, my DRM-infected e-book is lost.

I’ll probably only use the Kindle for cheap books I’ll never want to read again. Hunger Games fits that bill.

2 thoughts on “Book Review: The Hunger Games, by Suzanne Collins”