Apple announced a new version of iBooks for iPad a few weeks ago, focusing on how it can deliver inexpensive textbooks to students. It’s being pushed as a revolution in education, but does the same update have applicability outside of the classroom? 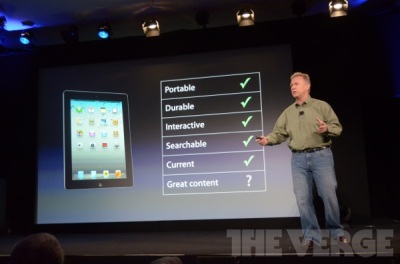 Aside from the (often gimmicky) interactive widgets and other benefits of electronic books, they offer “current” as another advantage of electronic books. The main idea here, in the context of textbooks, is that a new edition can be distributed inexpensively, without the need to buy a new 5-pound $300 book every year. I see potential for another use: episodic fiction.

Serial publishing is not new. When advances in technology and economy allowed magazines to be widely distributed in the 19th century, it was popular for authors to release long works in short segments. As magazines shifted their focus away from episodic fiction and television replaced that niche, the idea of a serialized work of text started to die (with occasional exceptions, like Stephen King’s The Green Mile). Today, we’re facing more leaps in technology and in the economics of distribution that, I think, have potential to bring serial fiction back.

Imagine this: you hear about an author releasing a story with an intriguing premise. You download the first “episode,” then every, say, Wednesday, you get a notification alerting you that a new episode is out. Either for a small fee per episode (99 cents seems fair) or a flat “season pass,” you get new content every Wednesday for a few months, automatically updated and waiting for you when you open iBooks.

I’m not sure if this is how iBooks currently works (the new textbook stuff, as usual, locks out Canadians), but they seem to be going in that direction with the “books as apps” model. It’s not unique to Apple, either; the same thing could easily be implemented on any other e-reader with minor tweaks. It’s been attempted, but Apple’s app model demonstrates how streamlined it could be1. And in a generation that often prefers TV to movies and Twitter to blogs, maybe we’re ready for bite-sized fiction’s big comeback.

Would you buy a book that updates itself with new content every week? Really, I’m asking, because I have a few stories in the file drawer, and I’m seriously considering experimenting to try turning these tumultuous times into something awesome.

1 Note that Apple’s new updates come with a giant catch: a ridiculous license agreement. The main problem is that if you use iBooks Author to create a work, you can only sell that work through iTunes. It’s equivalent to buying a guitar, then finding an attached note saying you can only sell your music through Gibson’s store. Ridiculous. Hopefully this gets changed, or people realize simple workarounds (change one word in the file using different software; tada! All-new work that can be sold wherever you want).